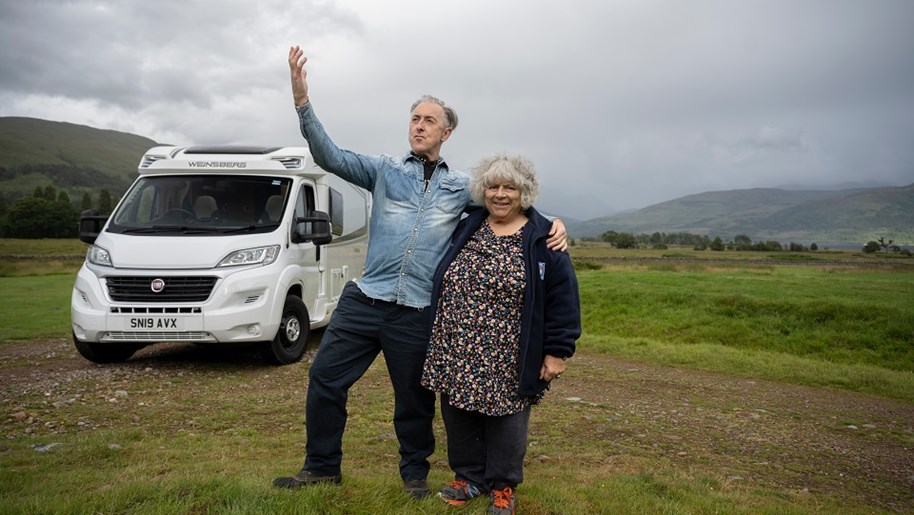 In this documentary series Hollywood actors Miriam Margolyes and Alan Cumming get cosy in a mobile home, as they roll back the decades and return to their Scottish roots. Part rediscovery, part revelation, they are on a mission to uncover the country of their youth, as they travel along Scotland’s cities, Highlands, and into its wildest places. The series is produced by Blink Films for Channel 4. A second series has been announced which will follow the pair as they take in some of Scotland’s most spectacular and far-flung locations before they journey across the pond to their other mutual home, the American West Coast.

Powerful documentary MYLEENE KLASS: MISCARRIAGE & ME (1 x 60’) has been acquired by SBS (Australia), Nelonen (Finland), NRK (Norway), Ananey (Israel) and BBC Persia. Produced by Hall of Mirrors for W (UKTV), this personal and revealing documentary sees Myleene Klass seek to break the taboo that surrounds miscarriage to help other women.

Immersive documentary STACEY DOOLEY: INSIDE THE CONVENT (1 x 60’) has been picked up by SBS (Australia), TV4 (Sweden), MTV3 (Finland) and NHK (Japan). Produced by Firecracker Films in association with Little Dooley for BBC One, the documentary follows Stacey Dooley as she experiences what it's like to live as a nun, spending 10 days living alongside the Order of the Holy Paraclete Anglican religious community. Also from Firecracker for W (UKTV) STACEY DOOLEY SLEEPS OVER S3 (4 x 60’) has been picked up by SBS (Australia), Bravo (NZ), NRK (Norway) and TV2 (Norway).

Travel-history documentary series WALKING HADRIAN’S WALL WITH ROBSON GREEN (3 x 60’) has been licensed by SBS (Australia), Top TV (NZ), APT (USA), UR (Sweden) and Ananey (Israel). The series follows actor and presenter Robson Green as he travels the length of one of the largest and most impressive remnants of the Roman Empire. Produced by Firecracker for Channel 5.